Foghorns of the Golden Gate 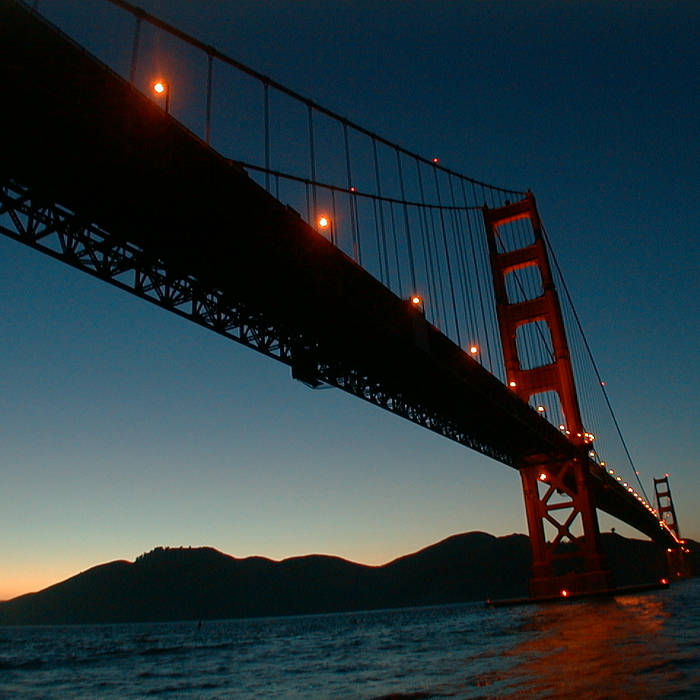 Dennis Chiapello I grew up hearing the foghorns of the San Francisco Bay from time to time, most memorably from my grandparents' house in the Mission district. They sound only slightly less mysterious to my ear now, so the experience isn't merely nostalgic. I like to listen to this recording through fairly good Bluetooth speakers, the volume turned down low.

NOTE: THIS TRACK IS LOOP FRIENDLY and is big enough to sound endless.

This is a high-fidelity recording of foghorns recorded near the Golden Gate Bridge.

In my current living situation in San Francisco, very near the Golden Gate Bridge, I can always hear the many foghorns that blast the night with their haunting and mesmerizing groans when the weather is just right. I may be weird, but I love this sound (and I assume others do as well.)

To aid in the safe travel of vessels as they pass under the Golden Gate Bridge, foghorns have been mounted on the Golden Gate Bridge since its opening in 1937. United States Coast Guard, Waterways Management Branch sets the tones and timing pattern of the foghorns. Each foghorn has a different pitch and marine navigational charts give ships the frequency, or signature, of each foghorn.

Two foghorns on the south tower of the Golden Gate Bridge sound together to make a single blast every 20 seconds, while the Golden Gate Bridge mid-channel fog diaphone sounds two blasts every 40 seconds. The two horns are attached to the pier below the south tower, 20 feet above the waterline; three more are suspended from the deck at midspan. The horns at the pier emit a lower and longer monotone than the midspan horns, which are two-toned. Inbound vessels are instructed to steer away from the low blast and toward the higher cry.

The detection is visual, and the operation is manual. No computers or satellites or radar are involved. The horns can come on any time of the day or night, and once on, they'll stay on until the channel west of the bridge clears.

In the late 1970's, the two-tone foghorn at mid-span stopped working. One of the horn's two air valves gave way and the two-tone horn became a one-tone horn. Since the mechanism was so old, replacement parts were impossible to find. The hobbled horn continued to sound with just one-tone until 1985, when the original fog horns were replaced by new horns manufactured by the Leslie Air Horn Company. The new single-tone horns (or fog diaphones) differ in frequency or tone from each other, but operate with compressed air, just like the originals.

In July of this year, I finally got a good opportunity to record the foghorns of San Francisco Bay. About 10:30pm, I crossed over the barriers and walked to the parking lot above Baker Beach ( adjacent to the strait ) and recorded this long sample of the foghorns at night.

It was magical. In the distance, while recording this, I could see the lighted bridge being alternatively hidden and revealed by the fog, and my recording location was curiously quiet and devoid of any traffic or city noise at all. Just the foghorns and the surf on this beach.

So here's 13.5 minutes of the famous San Francisco foghorns , to me one of the most comforting sounds available, suitable for general grooving, meditation, or getting to sleep.